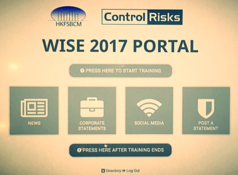 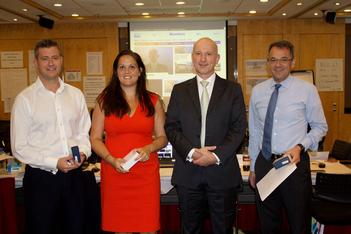 WISE 2017 was successfully held 27th October 2017, following the inaugural event held in 2015. This exercise series enhances Hong Kong’s position as a world-class financial services centre by helping to strengthen the resilience of the industry. The event was led by the industry, overseen by the Hong Kong Financial Services Business Continuity Management Forum, who commissioned Control Risks to design and deliver the exercise.

The final report can be downloaded here.

A web based portal, designed by Ruder Finn Asia was used to deliver the exercise

materials to the various participants. Crisis Management Teams, consisting of

senior management from each financial organisation, could view video news

The WISE2017 welcome video: part 1 by Willem Hoekstra and part 2 by Will Brown.

communications. This created a highly interactive environment designed to allow

organisations to practice their public facing response to a crisis.

Delivery of the exercise materials, monitoring of the exercise progression and overall command and control was centrally coordinated through the WISE 2017 Command Centre. Overseen by HKFSBCM and Control Risks, with technical support from Ruder Finn and staffed by over 50 volunteers from across the industry, the Command Centre ensured that all exercise materials were delivered, and the pace increased or decreased to reflect feedback from participants.

Prior to the delivery of the exercise, two 'Participant Briefing' sessions were held. These provided financial institutions with relevant industry briefings as well as information relating to the organisation and planning of the exercise. The briefings covered up to date information on cyber threats and provided good practice advice in relation to Crisis Management.

In addition, two initial information briefing sessions on the WISE initiative, hosted by HKMA and SFC were held in March 2017.

Finally, two briefing sessions for the facilitator in each Crisis Management Team were held. The last session was 9 October 2017.

If you are unfamiliar with crisis simulation exercises, please refer to the WISE and WISE2015 section of this website, which has a host of information, including a Frequently Asked Questions section.